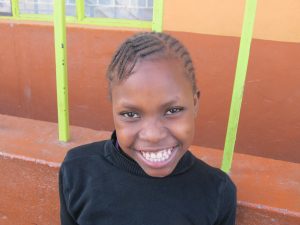 Antonnet Akinyi was born January 23, 2008 and is a total orphan because both of her parents died of HIV related causes. One of her relatives who was willing to stay with her and her siblings took them. The relative got so sick until she was unable to take care
of them any longer. She passed on leaving Antonnet hurt and broken since she was the youngest. Her two elder
brothers indulged into drugs and Antonnet was left with no one to take care of her. One of the children’s
officers passed by and found Antonnet sleeping beside a sewage. She had not eaten for days and
that’s when she was brought to Cana Rescue Center in 2015.