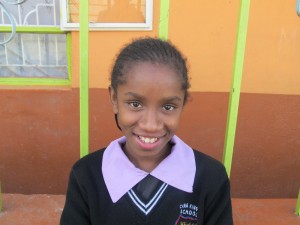 Blessing Nduku was born 12/25/ 2006.We gave her the name Blessing because she only had one name, Nduku. She is the second born in a family of three. She became orphaned in 2010. Their mother was killed by their father after a domestic quarrel. The father then committed suicide. The sister to her mother took them in. However, she is not financially stable and has no job. They have been in and out of school and they were malnourished. We have taken Blessing and her sister Natasha Njambi into the home and are counseling them because of the trauma they went through. Her story is the same as her sister’s. They went through the ordeal together and were taken by their aunt together. Both Natasha and Blessing were recommended to us by the local administration.