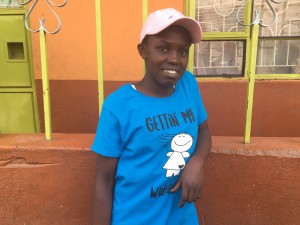 Catherine Awoche was born January 3, 2002 and the second born in a family of five. Two siblings have already died and she has two brothers Allan and Elisha. She lost her Father in 2004 due to TB and AIDS. They immediately went to their rural home in Bondo, Kisumu. It was there that her mother succumbed to illness in 2007. Life was hard there and it became harder after the death of their grandfather in July 2009. Their grandmother was old and could not support them fully with the small scale farming that she did. They often went hungry and never attended school. During a visit to their rural home, an uncle who lives in Mukuru Kwa Njenga decided to take them under his care. Life did not improve greatly as the uncle is a casual laborer. They would only get food the day he got work and they would go hungry when he found no work. They were still not able to go to school because of lack of school fees. Catherine’s problems were brought to our attention when she walked in the Cana Rescue Centre to ask for food because they had gone three days without food. The social worker visited the home to verify the living conditions. After informing the Cana management Catherine was brought to Cana Rescue Center. Catherine is a quiet girl who loves reading, writing and playing with the other kids. She wants to be a pilot when she grows up.