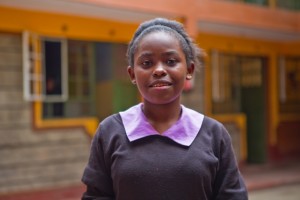 Diana Mutheu was born August 4, 1999. She is an orphan whose parents died when she was 4 years of age. She had been staying with her grandmother since then but in June of 2008 she came to Cana Rescue Center because the grandmother was unable to care for her because of old age. Diana loves to read about God and wants to be a teacher.