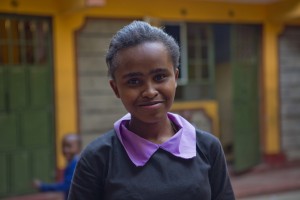 Mercy Nduta was born July 24, 1999. After the death of her mother, who was a single parent, her aunt took her. Later her aunt abandoned her. Her grandparents took her but were not able to care for her. She never went to school until she was taken to Cana Rescue Center. Mercy loves to play and jump rope and wants to be a business manager.