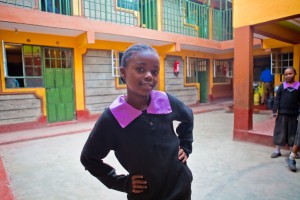 Victoria Ambio was born 6/12/2004. She is an orphan from a single mother who left 3 children. Her mother died of HIV/AIDS related infections. The 2 children were left with the grandmother. Later the Grandma died and the children were taken by her aunt who was unable to take care of them and her own children at the same time. Then the Auntie decided to bring her to Cana to seek help since she was unable to take care of her own 3 kids and Victoria and her siblings. During our own investigation we found that there was a big need for help because the auntie was selling bananas on the streets for the survival for the rest of the children so we admitted her.