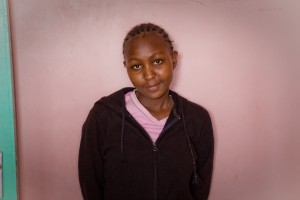 Sarah Nyan’gara was born 1/21/2002. Her mother died in 2008 and her Father in 2009 due to HIV/Aids. She was initially depressed, and before she could recover from mourning, she was forced to become a housemaid because of hunger. Later, her aunt rescued her but she was not able to take Sarah to school because her husband is disabled and she could not earn enough money. She was also forcibly circumcised while she was young according to her family’s cultural beliefs. Our social worker managed to hear her story and followed it up. Since we rescued her, she has been undergoing counseling because of depression and the trauma brought about by the forced FGM. We are trying to help her in school because her grades are poor for her age. We are not sure of her exact age but the date we gave you is an approximation given by the aunt.