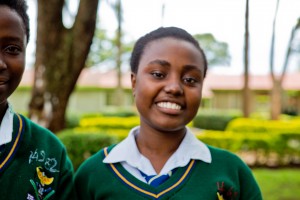 Susan Wanjiru was born December 15, 1998. She has 5 brothers and 2 sisters. After the death of their parents they were taken by their grandparents who later decided to abandon them. Later their big sister took them but started mistreating them up to the time Cana Rescue Center took them. Susan loves to read the Bible, storybooks and Swahili books. She wants to be a nurse.