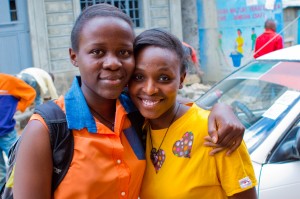 Cynthia Akinyi was born October 24, 1996. She has two brothers. After the death of her father it was hard for her mother to care for the children since she was without a job. She took the two brothers to their grandparents and was left with Cynthia. She began to mistreat her and made her go without food for days. Cynthia then began to work for her neighbors to earn a little money for food but they also abused her. She was then taken by Cana Rescue Center. Cynthia loves to read and dance. She wants to become a businesswoman.