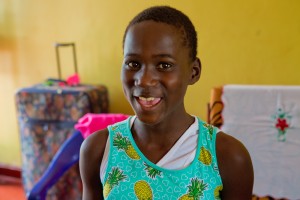 Cissy Naktao was born March 2, 2002. She has a fraternal twin sister Juliet Bebirye. Following the death of the mother, the father dumped the three-week old babies at the home of an American missionary lady. Unfortunately she also didn’t live long. She passed away when she had returned home for treatment. A YWAM team working with AIDS patients in the village learned of the fate of the children and they brought them to us. Since then we have identified the father. We have learned that the twins are the 7th and 8th of his 8 children. They have tested free of HIV although their father is struggling with AIDS and his health is deteriorating. He has since visited and was all smiles to learn that his kids are HIV negative. He said, Pastor I have given these kids for life. No person should ever temper with you. Cissy loves to run, dance and pray. She wants to be a pilot.