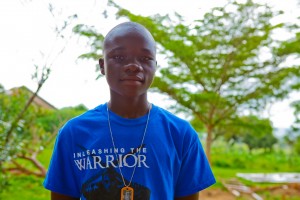 David Kagame was born March 27, 2001. He is the last of 5 children. After the death of both parents to AIDS, his grandma Milly Zalwango (72 yrs) took in all her five grandchildren. They lived in a ghetto 2 miles north of Jinja. After sometime a distant relative came from Rwanda and took three of the children, leaving the youngest two. Edith, the senior housemother, learned of the struggles of the older lady and presented the need to us. We prayed and felt the need to take David. David still remembers the ghetto very well and he is always happy to go visit grandmother and his brother but he does not want to spend the night there. He had not attended school previously therefore he was behind. His teachers feel that he will catch up are working with him to do so. David loves running and playing soccer and wants to be a builder.