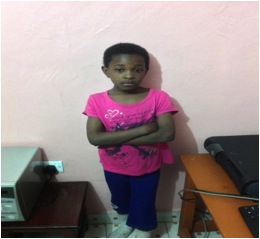 Diana Mbithe was born November 27th, 2005. She is an orphan raised by by a single mother who committed suicide after passing through difficult times trying to raise her children. Diana is the last born in a family of three siblings. Her aunt who is the only sister to her mother decided to take her since she was the youngest and the others were left to take care of themselves. Her aunt stayed with her and after a while she changed and started to mistreat Diana. Her aunt who is self employed used to go to the market and Diana was left at home to look after her aunt’s small child while other children were going to school. Diana’s aunt used to deny her food, give her tough house chores to do and when Diana couldn’t finish her duties, she was beaten thoroughly and was forced sometimes to sleep outside. After a while the neighbors saw it was too much and they decided to approach the authorities who were able to trace her elder sister to take her. Diana’s elder sister is unemployed and has been surviving by the help of well wishers and church. She had nowhere to stay as they were hosted by the neighbors. Diana’s sister decided to seek help from the local area chief and was reffered to Cana.