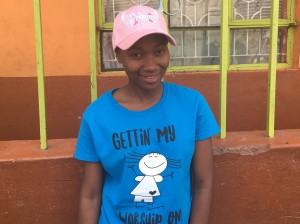 Helida Atieno was born May 8, 2000. She lost her mother at a very tender age. Then at the age of six her father passed away. Her aunt took her immediately. At her auntie’s place her living conditions were bad. She was mistreated and overworked and her aunt used to taunt her that her parents had died of AIDS. Helida was forced to seek help from the police who passed her onto the local children’s department offices. She refused to go back to her aunt’s place and so officers from the children’s department brought her to Cana Rescue Center on July 9, 2010. Helida also came with scars from the abuse by her aunt.