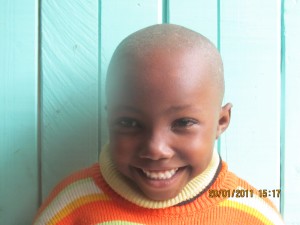 Naomi Munanie was born 3/8/2007. She was rescued at a time when her physical condition was so bad due being malnourished/malaria. The day that we rescued her, she had stayed for three days without food waiting to die. She is the seventh born in a family of eight. Her Father died due to TB complications and mother due to HIV/Aids complications. Naomi’s aunt was concerned about her situation and took her. However, she was not able to help much because of poverty. When we took her in she was bedridden for two weeks as she recovered. She is five yrs old but she looks three yrs old. She is now on her way to recovery and has started school.