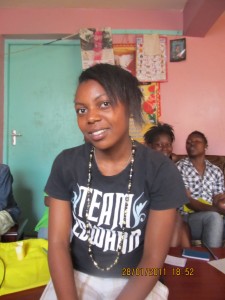 Mary Kaloki was born December 19, 1996. She has seven sisters. After her mother’s death she was left with a very ill father who could not work or care for the children. Mary never attended school. Because of her lack of care she was taken by Cana Rescue Center. Mary loves dancing, watching movies, making and spending time with friends. She wants to be a doctor.