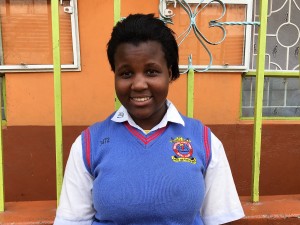 Jane Mutheu born 10/20/2004. Jane Mutheu was an orphan in a in a family of four siblings, her mother died 2011 by Sinai fire which exploded in a slum. She was taken by her aunt who later abandoned her. After this, Jane’s grandmother took her but was unable to take care of her and provide food. She also droped out of school and that’s why her grandmother decided to bring her to Cana for help so that she can get basic needs. We took her July 26th, 2013 to the rescue center. Jane will join high school in the year 2017.