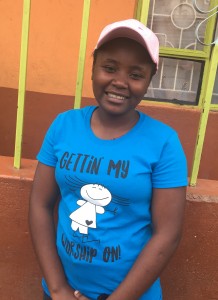 Jane Waigwe was born January 15, 2002 and is destitute child raised by a single mother whom has also been ailing from prolonged T.B. Her father was the only breadwinner and her mother had no means of survival since she had no employment. Jane is the firstborn child in a family of three siblings. Her mother has been struggling to raise these children as they depended on well-wishers, neighbors, and churches in order to get food. Many are the times they went to bed without taking food. Sometimes their landlord used to throw them outside for not paying rent. Jane has not been performing well at school since she used to be sent away by the teachers due to lack of school fees. Since Jane is the only girl in their home, neighbors recommended her mother to seek help and was directed to Cana Rescue Center.