Meet the Pastors of CFA 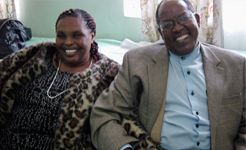 Pastor Mary Mambo was a nurse in an upscale hospital in Nairobi and was the women’s ministry leader in her church. She was burdened by the Lord to go to the slums and set up a medical clinic. To do so, they would have to sell the family farm. After much prayer, she and the family decided to obey the call. Joseph was a businessman and has committed himself to support his wife’s vision to help the poor. Since then, Mary and Joseph have also started a school, a church and a group home for girls all in the Mukuru slums of Nairobi. Both are ordained pastors the East African Theological Seminary. Mary received an award from the city of Nairobi as the outstanding worker among the poor in 2009. 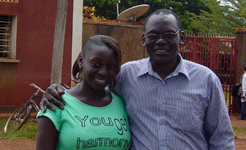 Jinja, Uganda is the location of the source of the Nile River as it flows north out of Lake Victoria. It was from this river, where thousands of years earlier, the infant Moses was delivered from certain death. Uganda is a nation of a multitude of orphans. Pastor Joseph Mulungi (pictured with his daughter Esther)is a prayer leader in Jinja organizing many prayer efforts in his city. He was challenged by this question; “Who moves God’s heart more on the days of your prayer gatherings, those inside the stadium or the homeless children crying in the cold outside the stadium doors?” This question bothered him to the point of action. A donor partnered with him to build the existing group home which houses 9 children in a rural area outside of Jinja. As Moses was delivered from the Nile, these children have been delivered from despair and poverty. He oversees a quality group home in the beautiful rural setting above Lake Victoria. He has plans for an entire campus with several additional group homes.