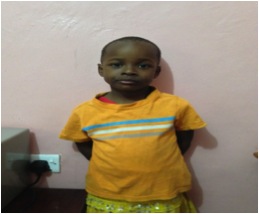 Agnes Moraa was born on May 18th, 2009. Agnes is a vulnerable child who was raised in a family of two siblings. Their father left them at a tender age after Agnes had been defiled by the father when she was 2yrs old. When the mother discovered, she opted to take her child to the hospital and that is when her husband decided to beat her thoroughly to the extent that she collapsed and was bedridden for two days in order for her not to be able to take the child for check-up. Her neighbours came to her house and took her to the hospital because she was badly injured. When she recovered, she took Agnes to report the matter to the police and thereafter went to Nairobi Women’s Hospital to have Agnes been checked since it’s the adviced hospital that deals with rape cases. Agnes was treated and discharged, afterwards they were summoned by the court as Agnes’ father offered no help. Agnes’ mother has been struggling to feed and educate her children since she had no job. She used to wash clothes for people in order to feed her children. Other times when she hasn’t gotten work to do they went to bed with no food. Church has been helping her by giving her food and some little money to pay rent. They have been moving from one place to the other since the husband threatened that he would kill them. Agnes’ mother approached Mrs Mary Mambo and shared her story since Agnes was not going to school and Agnes was taken to Cana Rescue Center.