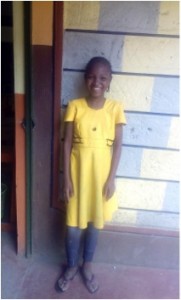 Emmaculate Ndungwa Kivinda was born on October 17, 2005. She is an orphan and sister to Maureen Mumo whose mother died of HIV related causes and TB. She was raised by a single father who is alcoholic and sickling. The father was unable to take care of the two girls as he was always absent leaving Emma and her sister vulnerable to people who were physically and sexually abusing them. The neighbors were concerned and reported the case to the area Chief and Cana Rescue Center rescued them in April of 2015.