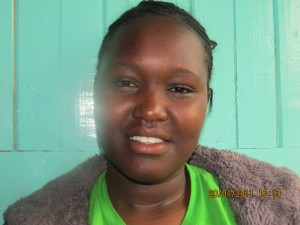 Caroline Wanjiku was born _____. She is a pure orphan and sister to Milka Wangui. Since we were able to get another sponsor we were able to bring Caroline to Cana Rescue Center in Jan. of 2011. The mother died in 2005 due to HIV related infections. She had two children who were left with the auntie. The aunt then passed away last year. Since that time, it was the grandmother who was taking care of them. When Cana Rescue Center met them, they were desperate, and we decided to take Milka who was the younger one and now with an additional sponsor are able to take Caroline. She was not attending school when we took her, but now she is in school. She is in class seven. We will evaluate her performance this year and see if she needs to repeat the class.