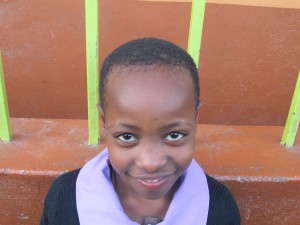 Kasiva Mbula was born on September 2, 2008. She is an orphan raised by a single mother who died of Hiv/Aids related cases. She has been living with her uncle who is an alcoholic. She has not been attending school regularly as per required due to lack of uniform and other learning materials. Life has never been easy to Kasiva as she used to stay many days without eating food and when it was too much to bear, she went door to door to beg for food. Her uncle is a casual labourer and is also alcoholic, the little money he gets he used to drink instead of taking care of his family. His wife decided to pack and left him with Kasiva since she couldn’t take it anymore as she used to be thoroughly beaten when she was asking for food. Kasiva went to school with torn clothes and barefooted and at times refused to go back home. Kasiva’s teachers were concerned with her situation and decided to consult one of the voluntary children officers for help since they feared the uncle could harm Kasiva if she returns back home. The officer brought Kasiva to Cana and we decided to take her.