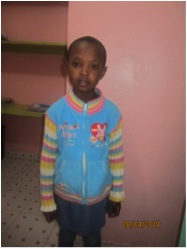 Lucy Wanjiku was born November 17, 2006. She is an orphan as her father died of HIV/AIDS related cases and her mother is also ailing of the same condition. She has been admitted to the hospital the last 9 months and is no longer able to take care of her children. Lucy and her brother were taken by one of their aunts who is the only sister to their mother. Her aunt is a single mother taking care of Lucy and her brother including four children of her own. Since the aunt is unemployed, Lucy was not going to school or even eating food on a daily basis, which was a problem. Lucy together with the other siblings used to go door to door to beg for food and clothing while her aunt has also been trying to find help from churches and neighbors. It reached a time they were even staying for days without eating. Lucy’s condition grew worse as mosquitoes bit her, since she was not sleeping under a mosquito net. Their neighbor who has been helping them by offering food, advised Lucy’s aunt to seek help from the area chief and thereafter she was referred to Cana Rescue Center even as the chief is trying to find a permanent solution for Lucy’s aunt and the remaining children, since they are boys.