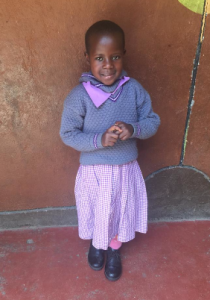 Veronica was born April 6, 2014. Veronica Bosibori and Lydia Nyakala are blood sisters. These two sisters are vulnerable orphans who lost both their parents in June 2018. THey both lived with their poverty stricken parents who worked on other people’s farms to make ends meet. They managed to educate their children and offer them at least a meal a day. However, in June, their parents were ruthlessly murdered by thugs, leaving the children in a small house. The neighbors took the responsibility of buring them. After the funeral, the children were abandoned by everyone and faced difficulties. They were mourning their parents, lacked food, stopped going to school and went everywhere roaming for food. Neighbors reported the issue to the area chief, who approached their uncle who lived in that are, and requested him to support the children. Instead, he abandoned them and continued with his life of drunkenness; he would often beat and verbally abuse them threatening to kill them. On hearing about the family from the local chief, Cana Rescue Center accepted to rescue them. The children have been at the center since 9/5/18. Since they have been traumatized they need a lot of counseling, care, and support to start having hope of living as they seemed to have lost all hope.